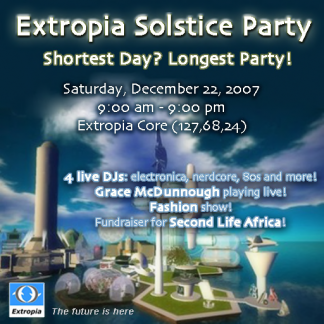 Please join us on December 22nd for an all day celebration of the Winter Solstice at Extropia Core.  I'm playing a gig at 3PM SL and there will be a very special fund raiser for SL Africa which you will not want to miss!

The Holiday Charity Campaign for 2007, will support the following four charities : Doctors Without Borders, The International Committee of the Red Cross/Red Crescent, The Autism Society of America and The Lupus Foundation of America.  Please join us in raising money for these very worthwhile and important charities.
Location:  Forcythia's Fantasy2, ElvenMoor (172, 173, 22) 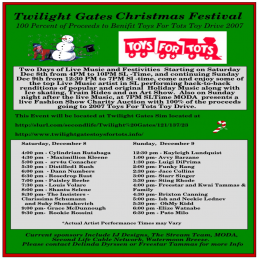 Please join us on Saturday Dec 8th for some holiday cheer and fund-raising for Toys for Tots charity.

I'll be overly caffeinated as my slot is at 9PM SL (12AM ET)  and it's a family-show, so that means Santa Baby will NOT be gracified this time.  You can get there directly from this link. 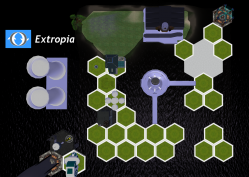 This Saturday, December 1st I'll have the distinct pleasure of the spotlight at Sophrosyne's Saturday Salon hosted from Extropia Core.

Sophrosyne has been hosting the Saturday Salon events since September,  covering a range of topics about Second Life ranging from fashion, sex to banking and this Saturday we'll talk about live music and the multimedia experience.  Afterward, I'll do a live gig for all that want to stick around so I hope to see you there. 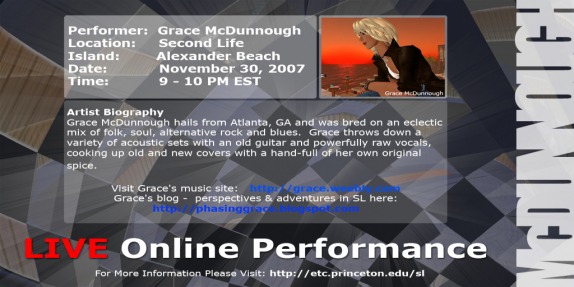 I am thrilled to have the chance to play again for Princeton University.  Of all the universities, each of them making their own "we're first" hoo-haa, Princeton stands among the few in style and integration.  Persis Trilling employed one of the most inspiring builders in SL - Scope Cleaver - to create a spectacular live music venue.  Scope is a gifted builder, with an eye toward detail, space, mood and I'm not sure I'll be able to stop staring at this venue long enough to sing.  I hope to see you there, even if you only came to explore the magnificent build.

I got this note from one of my friends which put big sunny smile on my face in what was otherwise a cloudy day..

"I am going to be out on a boat for a month and I downloaded all your songs :))  "Fallen State of Grace" is one of the most beautiful songs I think I have heard"

I agree; Salome is a remarkably talented writer and without her gifts my music page would be sparse.

Musimmersion: the future of live music in Second Life? 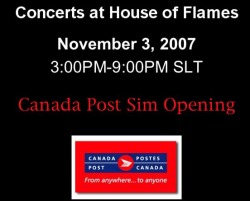 I have the privelege of opening for the Canada Post Sim Opening on November 3rd at 3PM SL (6PM ET), and I could not be more thrilled.

So many of my friends in Second Life are Canadians, and this is a House of Flames production led by Flameheart Sol and company, which means it will be fantastic.

Look for the event posting, or just head directly there via SLURL.

October 26-28th is the West of Ireland Music Festival to raise awareness and funds for Project Children.  Wonderfully diverse musicians from Second Life will be performing, and my slot is Saturday at 12PM SL (3PM ET) take the SLURL to get there. Please join us for this important cause.  More information here. 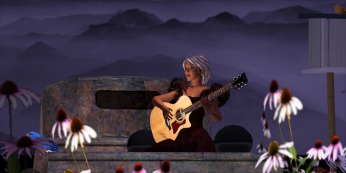 Musimmersion continues this weekend and we've been filling up early so if you plan to attend, try to arrive 15 minutes before the hour.  The next show is October 30th at 6PM SL (9PM ET).

If you've been to a gig lately you know I have a few new songs in the mix, thanks to the prolific pen of Salome Strangelove.  Salome is a gifted writer in her own right, but recently turned the page to writing lyrics  - much to the delight of me, Lyndon Heart and the live music community at large.

I've posted one of the newest, "Terms" to the site and as soon as I get to it I'll post the other two - the first a gripping song about losing touch called "Last Chance" and the second, a beautiful new ballad called "Fallen State of Grace". 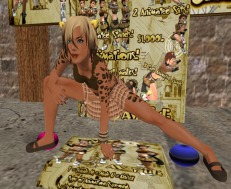 I'm really looking forward to my next Neko gig, especially as it will be hosted by the infamous neko, kistune, rodent mistress and developer extraordinaire, Philo Scion on her Glass Earth sim.

I've been fortunate to play regularly at some of the best venues in Second Life, but over time I've felt like I've been on a perpetual road trip.  Sometimes the large venues and 50+ people can be overwhelming, and I'm blessed to have good friends - both listeners and performers - that just enjoy the music and the social atmosphere so I've decided to stand up a very small venue that I'm calling Grace's Escape (until I think of something more interesting).  There I'll play small more intimate gigs, and hope to collaborate with other musicians and friends on new music, etc.

My good friend and the genius behind Nights in White Satin and Wish For You - Toby Lancaster - is finally letting his sound out of the box.  There was much rejoicing!!   He'll probably kill me for letting the cat out of the bag, but you must simply wander over and hear his stuff.  I'm trying to figure out how to cajole him into letting me perform "It Doesn't Have to Be That Way" on the Ninjam at Bliss.  Stay tuned. 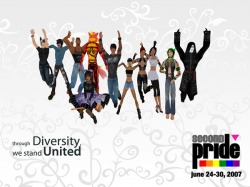 (June 23)  The team from the Avatar Action Centre gave me a chance to play for their Summer Solstice and it was a blast!   The venue was a Stonehenge recreation, set against a beautiful beach front and rainbow backdrop.  The AAC is working hard to raise funds and awareness in Second Life about sustainability issues that are plaguing our world and threaten our very existence as we know it. Drop by Undolsa and give check it out.
(June 24) I had a great time playing for an enormous crowd at the Second Pride 2007 festival opening on Sunday.    I crashed twice but the sim held fast which was a huge relief.   Many thanks to everyone that came out to support the event and cause.  I had a chance to play my new song, "Looking for Mister Wright" and I think it went over well.   I'll get it recorded this week and post to the music page.